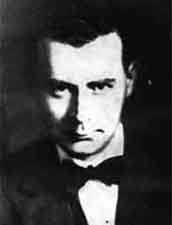 In the Romanian culture, Lucian Blaga represents the greatest creative personality of twentieth century. His work – as a poet, philosopher, essayist, playwright, and translator of poetry -constitutes a personal synthesis of great originality, of deep ethnic inspiration, fueled by an amazing openness to the most varied aspects of the spirit human: philosophy and science, history, and religion, and especially the complex field and controversial arts.

Lucian Blaga (1895-1961) was born in the village of Lancram (White County) in the central Transylvania; he studied in Sibiu and Brasov and studied theology in Vienna. After a period of almost seven years in diplomacy, in Bern and Lisbon, he became professor at the University of Cluj-Napoca, where the department was created especially for him of Philosophy of Culture, the main field of his intellectual activity. Four trilogies configure his philosophical thinking: The Trilogy of Knowledge, The Trilogy of Culture, The Trilogy values, ​​and the cosmological trilogy. In his metaphysical system, the emphasis is on both the ontological and cosmological problem and the gnoseological search.

The vision of the philosopher was shared by the poet, whose lyrical work demonstrates the influence of German expressionism. Blaga’s expressionism has a color distinctly Romanian: it is an investigation of traditional local latencies.

His lyrical work, published in volumes such as “Poems of Light”, “The Prophet’s Steps”, “In the great passage”, “Praise of sleep” shows a concern for morphology miracle.

The same concern for the miracle is felt in his plays that can be seen as a theater of poetic ideas. His plays deal with topics such as history and nationalism, religious and mythical subjects engraved on the background of popular heresies Romanian. “Master Manole”, his best-known play, deals with the problem heroism and the sacrifice necessary for creation. But if Blaga showed a great interest in our popular genius, the genius universally fascinated him. Poems translated from the world’s great poets, including Goethe’s masterpiece, “Faust,” proves his poetic talent and resilience his thinking.

Blaga died in 1961 (at the age of 66), at a time when the poet had not nearly exhausted his creative resources. His untimely death was the inevitable outcome of the long years of persecution by the communist regime that turned Blaga into a social outcast.

The adversities Blaga faced during his lifetime will be better perceived if we consider that in the 1950s, when Blaga was nominated for the Nobel Prize, the Romanian authorities of the time did not allow him to respond to the announcement made by Royal Swedish Academy. But if the authorities of the time revoked his right to Nobel Prize, no one will be able to influence the fate of the work that Blaga left to his descendants.