We are now at a time that marks the honoring of the memory of some illustrious forerunners, actively involved in the political process of finalizing the achievement of the Romanian unitary national state in the first decades of the nineteenth century. In that tumultuous period of the years of the Great War and the Paris Peace Conference, the history of Sibiu was strongly connected to everything that represented the effort to fulfill a desideratum that was initiated in the revolutionary years of 1848-1849.

Precisely to mark the place and honor the memory of those who worked for the Union in 1918, Sibiu City Hall launched in 2018 a project to inform the people of Sibiu and especially tourists visiting our beautiful city, which were the buildings and personalities involved in the preparation of the moment December 1, 1918 and then in the administration of Transylvania during the functioning of the Governing Council.

The unveiling of the memorial plaque is made in honor of Iuliu Maniu’s huge contribution to achieving and consolidating the Union of Transylvania with the Kingdom of Romania, as well as for to mark the importance of his activity during his stay in Sibiu as president of the CD. This disclosure also has a special significance in the context in which we are preparing to celebrate 160 years since the Union of Moldova and Wallachia under the only authority of Prince Alexandru Ioan Cuza, an act that was performed on the 24th January 1859.

– since 1919 the street has been named Carmen Sylva – the queen’s pseudonym Elisabeta – and the address was changed from no. 4 at no. 6;

– the current name – Bdul Victoriei – received it in 1970. The building was inaugurated on April 15, 1904, becoming the residence of the commander Corps 12 Army based in Sibiu, the command of this corps being at at that time General Emil Probst von Edler. The building was built by Julius Bielz and remained the property of the Bielz family until its nationalization in 1947.

Starting with January 1, 1919, the building was always a place of activities important in which Sibiu was a part: from the visit of General Berthelot, hosted in the current building of the rectory and until the distribution of some compartments of The Board of Directors in its premises. Thus, on April 6, 1919 it is recorded that:

– on the ground floor of the building (Lucian Blaga hall) the Auditor’s offices functioned accounts (CD accounting service), the Head of Security and the Press Office (led at that time by Silviu Dragomir – renowned historian and former secretary of the Sea National Assemblies from Alba Iulia).

– on the second floor was the residence of the President of the Board of Directors – Iuliu Maniu (b. 8 January 1873 in Sălaj County – d. Iulia Maniu was elected on December 2, 1918 as Minister-President of The Governing Council of Transylvania, a function equivalent to that of governor, fulfilling, at the same time, the function of interior minister. 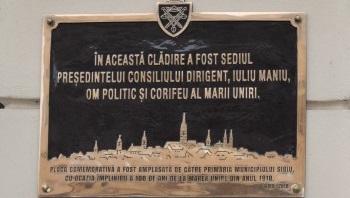