It is an ensemble that symbolically communicates through conventions on the medieval dress language, the status of Chief Rector with the rank of “Magnificus” of an autonomous and privileged corporations. 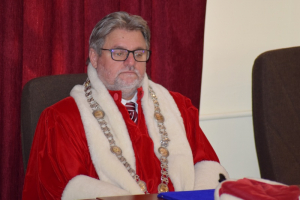 Respecting the heraldic coding, the Rector’s attire is scarlet red with ermine linings, signifyingies and signalings a sovereign authority or with delegated sovereign powers, in our case by the Constitution.

In the medieval tradition, academics have the right to wear loose, ankle-length clothing, like the clergy, nobles, and magistrates of the crown.

According to the supreme university rank, the rector’s robe is long, made of red velvet scarlet lined with ermine visible on the high-turned cuffs.

All the sumptuous outfits of medieval tradition, and of the university, include a play emblematic, “loros”, a long scarf, reduction of the Roman toga, sign of Roman citizenship and belonging to civilization, as opposed to barbarism. Loros, a symbolic object secular of the late antiquity of both sides of the empire, perpetuated in the west by church, transmitted to the Holy Roman Empire, in the east by the Byzantine Empire, is generalized in the lands of clergy, nobles, magistrates and notables, present in ceremonial use in the clothes of the clergy of magistrates and academics.

The Rector’s ceremonial attire is the property of the University, involves white gloves with long cuffs, as a symbol of the privileged status of “royalty”.